The current Dunwoody Cultural Arts Center "multi-arts complex", most commonly known as the Dunwoody Library (or Stage Door Players or Spruill Center for Arts), depending on your fancy, used to be a school.  It was called Dunwoody Elementary.  The Stage Door Players rent the school's old auditorium (subsidized by the City of Dunwoody) for their productions.  If you or your kids have thrown some clay at one of the Spruill classes you recognize the building as a former school site.  The library section was a later addition.

Due to declining enrollment the school district closed the school and sold the property to DeKalb County.  DeKalb County then relinquished control to the City of Dunwoody shortly after the city was formed a decade ago (back when people actually believed having our own city would stop the influx of apartments into the Dunwoody Village area).

Visionary Joyce Amacher is quoted in the article stating the need for the building to be used for arts.  The other option was putting the property on the open market and having homes built there (it was zoned R-100 residential).  Back in 1985 there was controversy over the sale of the property and its future use. 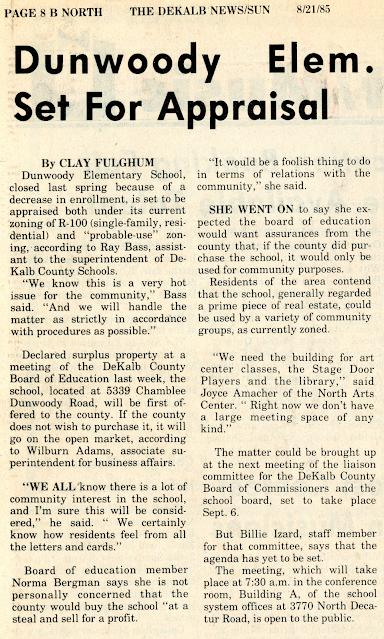 Posted by DunwoodyTalk at 5:52 PM